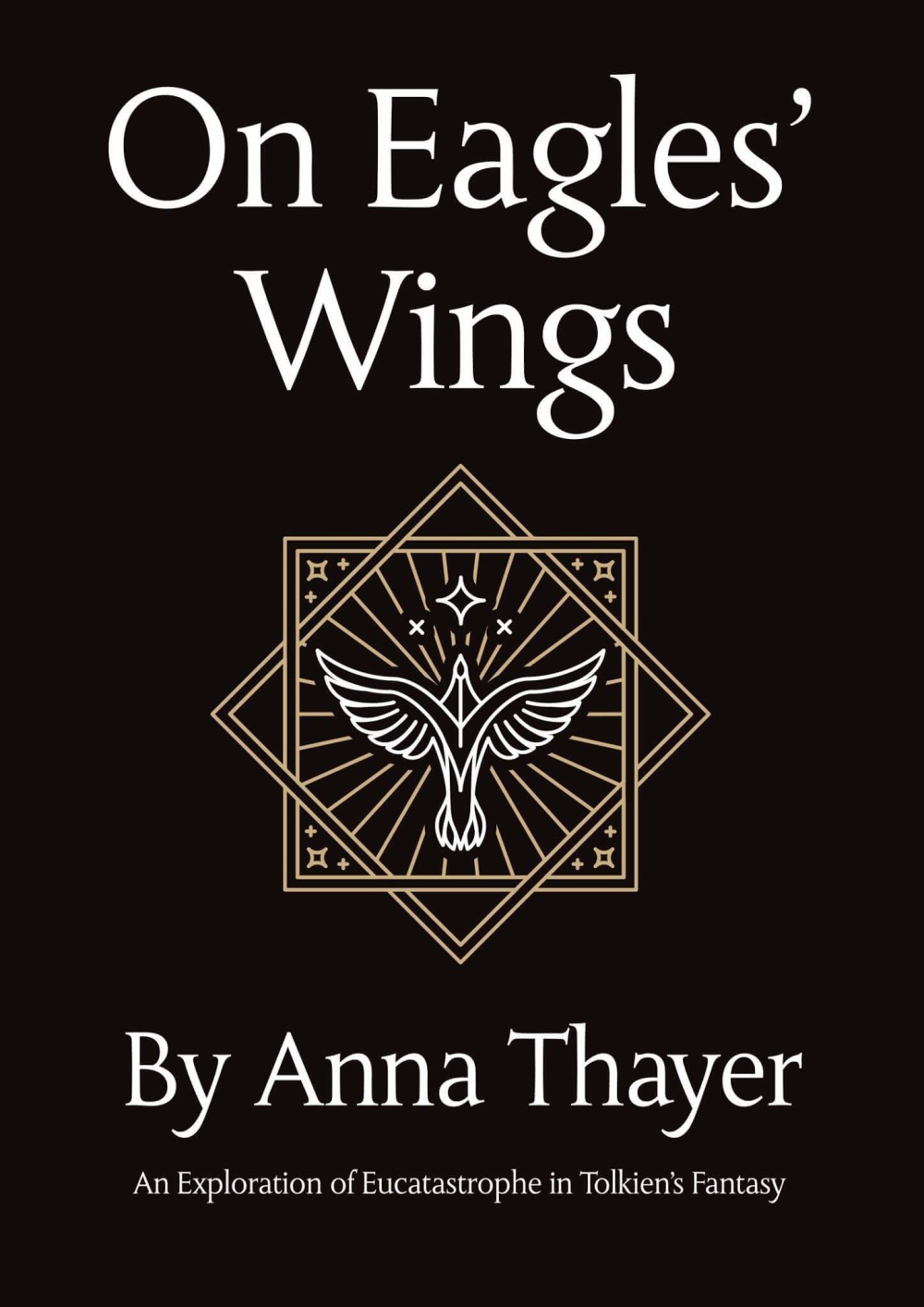 To celebrate the launch of my collection of essays on eucatastrophe in Tolkien’s work, I thought I would whet your appetite by reproducing the book’s preface here. If you like what you see, head on over to http://www.lunapresspublishing.com/ to pick up your copy!

The clouds were torn by the wind, and a red sunset slashed the west. Seeing the sudden gleam in the gloom Bilbo looked round. He gave a great cry: he had seen a sight that made his heart leap, dark shapes small yet majestic against the distant glow.

If you are at all familiar with Tolkien’s work, then Bilbo’s cry – proclaiming the arrival of Eagles – will be no stranger to you. Indeed, it is somewhat of a hallmark of the Master of Middle-Earth, one rejoiced over and lampooned in equal measure by his lovers and critics: at the moment of crisis, the eleventh hour when darkness holds sway and there is nothing more that the heroes can do to win the day, these plot-armoured birds appear, our protagonists fall conveniently unconscious, and when the heroes awake, the good guys have won.

A reductive way of looking at it, perhaps; but the Eagles, and their ability to swoop in and save all at the last possible moment (without a focaliser to witness exactly how they do it) seem, superficially, to fly in the face of good story telling. You could even argue that they entirely undercut the narrative by making all the efforts of the heroes amount to… well, nothing. And then there’s that niggling question – if they had all this power, why in Middle Earth didn’t they step in before, and save everyone a good thrashing?

Tolkien was not infallible, either as a man or a storyteller, and while some elements of his mythos resist our attempts to pin them down (Tom Bombadil-o, anyone?), it is possible for us to understand the eagles – even if we continue to object to them. To do so, we need to look into Tolkien’s critical writing and, in particular, his concept of eucatastrophe:

…I would say that Tragedy is the true form of Drama, its highest function; but the opposite is true of Fairy-story. Since we do not appear to possess a word that expresses this opposite – I will call it eucatastrophe. The eucatastrophic tale is the true form of fairy-tale, and its highest function… The consolation of fairy-stories, the joy of the happy ending: or more correctly of the good catastrophe, the sudden joyous ‘turn’… [the] sudden and miraculous grace: never to be counted on to recur… [gives] a fleeting glimpse of Joy, joy beyond the walls of the world… it can give to child or man that hears it… a catch of the breath, a beat and lifting of the heart, near to (or indeed accompanied by) tears… A tale that in any measure succeeds in this point has not wholly failed, whatever flaws it may possess. (OFS 68-69)

Tolkien’s treatise as to the purpose and function of fairy stories is as much a work of theology as it is of literary theory, culminating in his view that those stories that evoke the eucatastrophic turn ultimately reflect what he calls ‘the Great Eucatastrophe’ (73): the story of the birth, death and resurrection of Christ, which is ‘the eucatastrophe of Man’s history’ (72) – and that the taste of Joy which we experience in fairy in the unlooked for ‘turn’ is a glimmer and a pointer to that supreme eucatastrophe in our own, primary reality. Tolkien leaves Plato – and his theory of forms – quite in tatters: for Tolkien story, rather than distracting us from the true nature of things by presenting pale copies and imitations, actually, at its pinnacle, has the potential to draw us closer to God. Better let those poets back into the Republic, Plato!

So how does this concept illuminate the eagles for us? We need to understand them as a narrative embodiment of Tolkien’s eucatastrophic theory; they are the unlooked for grace, the redemptive turn – such a strong glimpse of Joy that the protagonists cannot truly and consciously look on it.

Of course, not being God themselves, the Eagles don’t solve everything. Despite their intervention, Thorin still dies, Frodo is still so injured that he cannot remain in Middle Earth. But these aquiline amigos are a pointer to that presence beyond the walls of the world that was so instrumental in Tolkien’s life and writing. Perhaps, in choosing the Eagles to crystalise this concept, Tolkien had in the back of his mind a few verses from Isaiah:

Lift up your eyes and look to the heavens…

those who hope in the Lord

will renew their strength.

they will run and not grow weary,

As this preface might suggest, I’ve been fascinated, inspired and led by Tolkien’s concept since childhood. Whatever my line of enquiry into Tolkien’s work, the sequence of clues has always led to the same culprit: eucatastrophe. The book that you’re holding represents a kind of eucatastrophe casebook, a series of investigations into Tolkien’s work that reveal how overarching this theory was in his writing and mindset. It is a theory that has, in turn, enormously influenced my own genesis as a critic and a writer.

I invite you to join me on my journey into the eucatastrophic qualities of Tolkien’s stories – for, while it found its pithiest expression in eagles’ wings, its touch on the landscape of Middle Earth is entirely inescapable.